1 and 2 Samuel bear Samuel’s name, though he is not the main character of the books. Samuel is prominent only in the first seven chapters, yet his role was especially significant as Israel’s last judge and as a prophet connected with Israel’s first two kings, Saul and David. The books, 1 and 2 Samuel, were originally one book and can be read seamlessly from one to the other. Samuel focuses attention on kingship – God’s kingship over Israel that is expressed through human kings, who were supposed to be God’s representatives. 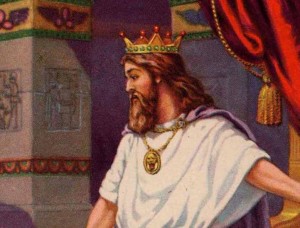 Samuel is about leadership in Israel, first by Samuel, who was judge, prophet, and priest, and then by Israel’s first two kings – Saul and David. One way to summarize the contents is around the three main characters and their roles in Israel:

The central and most critical issue of Samuel, and of all Old Testament books from Deuteronomy through Kings, is God’s rule over His people. The essential question is, Will Israel submit to God’s rule or to someone or something else? God’s rule may be expressed through human leaders, such as a king, but will people submit to it in whatever expression is current at the moment? Samuel opens with a leadership crisis. God’s word was infrequent. Eli, who was judge and priest, had corrupt sons. The Philistines were pressing against Israel. A crises of leadership in Israel is made clear in the closing chapters of Judges. A refrain is repeated four times in the appendices of Judges – “In those days there was no king in Israel” (Judges 17:6, 18:1, 19:1, 21:25). Two times another statement is added – “every man did what was right in his own eyes” (Judges17:6, 21:25). When we put these observations together against the dark and sinful dealings recorded in the appendices, it is most likely that Israel having no king is a positive statement about kingship. The point is that without a king, anarchy reigned … that having a king could help this situation.

These statements should be read against earlier statements God made about kings. As early as God’s promise to Abraham, God spoke of Israel having kings (Genesis 17:6). God even gave prospective laws and instructions for Israel’s king (Deuteronomy. 17:14-20). Neither Samuel nor God was happy with the people’s demand for a king in the days of Samuel. But read carefully to see that the people demanded a certain kind of king – “a king to judge us like all the nations” (1 Samuel 8:5); and even when Samuel explained what this would mean, the people were adamant about it – “No, but there shall be a king over us, that we also may be like all the nations, that our king may judge us and go our before us and fight our battles” (8:19-20).In response to this demand, God gave them a king and used the situation to help them learn, among other things, what kind of king they needed and should want.

This brings us to another theme in Samuel – Saul’s failure as king. God made Saul king, and, it seems, he was also the kind Israel wanted. God chose Saul and through Samuel anointed him. God equipped Saul when the Spirit came mightily upon him (10:6). God also gave Saul divine endorsement by a victory on the battlefield (chs. 10-11). The text says that the people chose Saul (10:17-19) and that God chose him (10:20-21). A reasonable way to reconcile these statements is to conclude that God chose the kind of king that people wanted and demanded, and yet, God explained that it could work … if ….” Read 1 Samuel 12:14-16 to see this.

It didn’t work, however. Saul developed a pattern of mistakes and sins. As a result, God sent Samuel to anoint another king (ch. 16), and the selection focused on the man’s heart (16:17). God found this person in David. The Spirit of God left Saul and came mightily upon David. Saul grew increasingly paranoid and this clouded his judgment and severely diminished his leadership ability. We are able to see both the potential and the tragedy of Saul’s kingship. God would have been with Saul in every way, if Saul had been with God. Instead, it seems that God used Saul’s kingship to teach His people about the kind of king they needed and should want and support. All this made way for David to be Israel’s king – David who is shown to have precisely the virtues that Saul lacked.

Over time, it became clear that David would be Israel’s next king, though this took some time since Saul was still on the throne. When Saul died, David became king immediately in Judah (2 Samuel 2) and eventually over all Israel (2 Samuel 5). Once David consolidated his leadership and nation, he acted to establish a capital city and to bring the ark of the covenant, the symbol of God’s presence, into the city (ch. 6). David planned to build a house for God, but God intervened for the moment to explain he would instead build a house for David. This is the covenant God made with David for the sake of His people (2 Samuel 7). God would make David a great name (9) and give His people their own place (10) and rest (11). He would build a house for David (11) – a dynasty;. his descendants would sit on the throne (12), and God would establish the throne of his kingdom forever (13, 16). One striking feature of this covenant is the similarities with God’s covenant with Abraham (Genesis 12:1-3, 17:1-8). It is in the same stream and, in effect, developed and perpetuated the covenant from many years before.

The covenant God made with David gives expression to the nature of David’s kingship. It was by no means “like all the nations”; it served as a charter for David’s dynasty, promoted David as an ideal king, and established an eternal throne for David. But what happened to the physical line of David’s descendants is what always happens when people are involved – people sin. The physical line of Davidic kings eventually ended (Jeremiah 22:30, Psalm 89:49), but God’s purpose never depended on human accomplishment. God’s promises would be fulfilled by a David-type king – who was like David in his role and function as an ideal king.

Now let’s consider the message of Samuel. Samuel makes a big point about God being king. He rules, but He doesn’t force people to submit to His rule. God exercised His kingship through human kings, and people would enjoy and benefit from His rule only by being loyal to Him and obedient to His covenant. God’s will will be accomplished, but whether or not one participates in it and enjoys its blessings and benefits is conditioned upon what each person does about God’s will.

Samuel tells a familiar story as other Old Testament books. God wanted for His people what He always wants – that they will be His people and He will be their God. In the passing of time and circumstances, God made clear what would, and especially what would not accomplish His purpose. God made people into a nation, gave them a land, provided law, sacrifices, priesthood, and leadership in the roles of both kings and prophets. But none of these addressed the critical problem or provided for people’s deepest needs. For this, God would provide a redeemer. God’s true and only Son would sit on David’s throne and accomplish what could be accomplish in no other way except through redemption. What God wants for people finally depends on God’s faithfulness, sovereignty, and remarkable grace.

PODCAST SUMMARY: Route 66: A Journey Through The Bible – Samuel

FULL AUDIO: Route 66: A Journey Through The Bible – Samuel