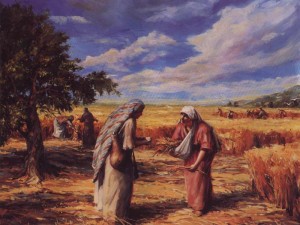 At various times and in various editions of the Old Testament, Judges and Ruth have been considered one book. The opening verse of Ruth places it within era of Judges, though we do not know exactly when the story took place. Judges and Ruth were probably written at different times and for different purposes.

“The book of Ruth contains one of the most delightful stories in the Bible. In it we see things “working out right” for all the main characters, and the reader finishes the story with the satisfied feeling that all is well.” 1

The book’s title comes from its main character, Ruth, a young Moabite widow who, out of love for her widowed Israelite mother-in-law, abandons her own culture, declaring, “Your people shall be my people, and your God my God” (1:16). Though she is destitute and relies on the kindness of others, Ruth’s disposition and character captures the attention of Boaz, a close relative of her deceased husband. Boaz fulfills the role of kinsman-redeemer and takes Ruth as his wife. Ruth serves as a wonderful example of God’s providential care of his people, and of his willingness to accept Gentiles who seek him.

On first reading, the plot of the book of Ruth is simple, clear, short, yet engaging. However, the plot turns on a number of legal customs that seem strange to modern readers. These customs are rooted in the Old Testament (cf. Deuteronomy 25:5-10 and the law of levirate marriage), but provide some problems for interpretation since they are not applied as the reader might think from their parallels in the Law of Moses. However, Ruth is not a legal document; it is narrative. This should be kept in mind when reading Ruth.

There is a significant contrast in tone between the book of Ruth and the book of Judges. Ruth accounts for the moral strength of its main characters and its plot resolves peacefully. Ruth demonstrates that the period of the judges was not characterized totally by chaos; that human virtues such as kindness and loyalty still had a place in Israel.

Ruth serves as a bridge between the book of Judges and the book of Samuel. Ruth is best understood as an introduction to David (cf. 4:17-22) and, by extension, the royal line of the Messiah. Ruth is a wonderful commentary on God’s inclusiveness. The book of Ruth communicates powerfully that God’s purposes are not limited to Israelites. Ruth, though a Gentile, placed herself in line with God’s purposes and became part of the royal line of David.

Note to listeners: Judges and Ruth were originally presented as one message, but have been separated for the purposes of this blog. The summary podcast below covers only the book of Ruth; the full audio covers both Judges and Ruth.

PODCAST SUMMARY: Route 66: A Journey Through The Bible – Ruth

FULL AUDIO: Route 66: A Journey Through The Bible – Judges & Ruth