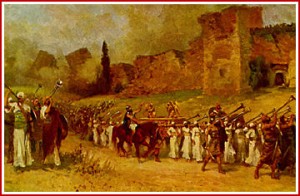 Joshua is arguably the most positive book in the Old Testament, as it focuses on one of the most joyous occasions of Israel’s national history – the possession of the Promised Land.

The book of Joshua is named after its principal character – Joshua, the son of Nun. Joshua was Moses’ apprentice and military general during the wilderness wanderings and became the leader of the Israelites after Moses’ death. Joshua is the traditional author of the book that bears his name, though the authorship and date of the book are disputed.

The book of Joshua details the successful conquest campaigns led by Joshua, the fulfillment of God’s promise to Abraham to give his descendants a land of inheritance, and the allotment of the inherited Promised Land. The book portrays God fighting for his people and his people living in covenant relationship with him.

Though Joshua can be considered a transition book – in leadership and in geographical location – continuity is the keynote of the opening passage. It reports a smooth succession from Moses to Joshua, following Moses’ death. The book of Joshua opens with God’s promise to give his people the land of Canaan as an inheritance. God also assures Joshua that he will fight for his people, pledges never to leave or forsake Joshua, and calls for Joshua to be strong and courageous and to dedicate himself to the study, practice, and teaching of the Book of the Law of God.

The book of Joshua divides naturally into two major sections, with an introductory notice concerning new leadership at the beginning and appendixes at the end.

The first half of Joshua details the conquest of the Promised Land (1:10-12:23), picking up the narrative from the book of Numbers. The conquest begins with preparations, both military (2:1-24) and spiritual (4:1-5:12). Joshua sends two spies to view the land, especially Jericho (2:1), which was the first target of the conquest. Joshua’s sending of spies into the land is reminiscent of Moses sending spies into the land forty years earlier (cf. Numbers 13). The words of the spies upon returning to Joshua indicate a perspective similar to the two faithful spies from the previous generation: “And they said to Joshua, “Truly the LORD has given all the land into our hands. And also, all the inhabitants of the land melt away because of us.”” (Joshua 2:24, ESV)

Following the Jordan River crossing, Joshua leads the people in three spiritual ceremonies, recorded in chapters 4 and 5. First, Joshua erects a memorial of twelve large stones, one for each tribe, at Gilgal so future generations would remember the works of the Lord (4:1-24). Second, the Israelites participate in a mass circumcision, which served as a permanent reminder that God had chosen them to be his people (5:2-9). Third, the Israelites participate in the Passover memorial, which served as a reminder of their exodus from Egypt (5:2-12). All three ceremonies underscore God’s covenant relationship with his people.

The battles of Jericho (5:13-6:27) and Ai (7:1-8:29) serve as the model victory of the conquest, and the model defeat on the conquest, respectively. Not all the battles of the conquest are recorded in Joshua and few contain details. The battles of Jericho and Ai make clear at least two things – God fights for his people and God expects his people to do all he commands them. God had spelled out clearly the rules of war before the children of Israel set foot in the Promised Land (cf. Deuteronomy 7 & 20). God promised to give them success as long as they did what he said and God promised to allow them to be defeated if they did not obey him. In the book of Joshua God does great things for his people, but he does not tolerate sin from them.

At the end of chapter 8, Joshua conducts a covenant renewal ceremony at Mounts Ebal and Gerizim (vs.30-35). This ceremony had been commanded by God through Moses (cf. Numbers 27). As God’s representative, Joshua constantly holds before the Israelites God’s covenant relationship with his people.

Chapter 12 summarizes the conquest, including both the victories of Moses east of the Jordan and the victories of Joshua west of the Jordan. Chapter 10 concludes by explaining why the Israelites enjoyed success: “And Joshua captured all these kings and their land at one time, because the LORD God of Israel fought for Israel.” (Joshua 10:42, ESV)

The second half of Joshua recounts the division of the Promised Land (13:1-22:34). After the recap of the conquest in chapter 12, the text notes: “Now Joshua was old and advanced in years, and the LORD said to him, “You are old and advanced in years, and there remains yet very much land to possess.” (Joshua 13:1, ESV) God then details all the land that had yet to be possessed and then says: “I myself will drive them out from before the people of Israel. Only allot the land to Israel for an inheritance, as I have commanded you.”” (Joshua 13:6, ESV) That land and peoples remained yet unconquered foreshadows the events of the book of Judges.

Ten chapters detail the allotment of the inherited Promised Land to the twelve tribes. The allotment may be broken down as follows:

“Thus the LORD gave to Israel all the land that he swore to give to their fathers. And they took possession of it, and they settled there. And the LORD gave them rest on every side just as he had sworn to their fathers. Not one of all their enemies had withstood them, for the LORD had given all their enemies into their hands. Not one word of all the good promises that the LORD had made to the house of Israel had failed; all came to pass.” (Joshua 21:43–45, ESV)

The book of Joshua concludes with two appendixes which occur “a long time afterward” (23:1). The appendixes are primarily the record of two speeches delivered by Joshua to the people before his death – one to the leaders and the other to the whole congregation. The speeches are reminiscent of Moses’ final speeches, which frame the book of Deuteronomy. The second speech includes the famous words: ““Now therefore fear the LORD and serve him in sincerity and in faithfulness. Put away the gods that your fathers served beyond the River and in Egypt, and serve the LORD. And if it is evil in your eyes to serve the LORD, choose this day whom you will serve, whether the gods your fathers served in the region beyond the River, or the gods of the Amorites in whose land you dwell. But as for me and my house, we will serve the LORD.”” (Joshua 24:14–15, ESV)

The book ends with the record of the deaths of Israel’s two main leaders during this period – Joshua and Eleazar, the high priest.

Joshua is a wonderful commentary on the holiness of God, the fulfillment of promise, the necessity of solidarity among God’s people, and the value of covenant relationship with God.

PODCAST SUMMARY: Route 66: A Journey Through The Bible – Joshua

A note to listeners: The full audio for this message is unavailable due to technical problems. Our apologies.