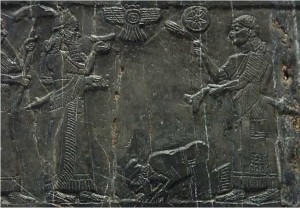 This is one of twenty reliefs on the Black Obelisk of Shalmaneser III (825 BCE), discovered in 1846 and currently housed in the British Museum. This relief features the King of Israel, Omri, kneeling in tribute before the Assyrian King.

In our English Bibles Kings is a two part volume within the collection of what are known as the history books of the Old Testament. However, Kings was originally one book. Like all histories, Kings is not objective. It was written from a prophetic point of view; that is, from God’s angle. In the Hebrew Bible Kings is found within the collection of what are known as the books of the “Former Prophets.” Most conservative historians agree Kings was written during the seventy-year Jewish exile in Babylon. Kings explains why God allowed his people be taken into exile. The reason is not that God no longer cared for his people, but that God’s people had betrayed their covenant with him. They had worshiped other gods, assimilated with other nations, and drifted into immorality, as is evidenced in Kings. Though his people were unfaithful, God demonstrated his faithfulness to his covenant promises by punishing his people for their sins with the exile.

The book of Kings may be outlined along the three stages of the monarchical period of Israel:

The Kingdom of Israel was united under three kings – Saul, David, and Solomon. Saul’s and David’s reigns are recorded in Samuel; Solomon’s reign is recorded in Kings. Solomon started out a good king, requesting wisdom from God so that he might rule judiciously. God gave Solomon wisdom and made him and the nation prosper greatly on the heels of his father David’s political and military successes. Solomon built great buildings, the greatest of all being the temple, which he dedicated to God with great festival. Though Solomon did much good, just as God did much good for Solomon, Solomon ultimately betrayed God by building high places for idols (1 Kings 11:6-10), sending the kingdom into a downward spiral from which it would never recover. In response to Solomon’s idolatry, God initiated the kingdom division, taking ten tribes from Solomon’s house, leaving only Judah and the remnant of Benjamin for the sake of the covenant God made with David (cf. 2 Samuel 7) to preserve a line of kings through him (1 Kings 11:11-39).

The first king of Israel, Jeroboam, led Israel deeper into idolatry by erecting high places for idols in an effort to draw the northern kingdom away from the centralized worship of their God in Jerusalem (1 Kings 12:25-33). With each successive king Israel became more and more evil in the sight of the Lord and, though God sent the prophets Elijah and Elisha to call them to repentance, they ignored God’s messengers, lost everything, and were taken into Assyrian captivity.

The southern kingdom, Judah, lasted about 150 years longer than the northern kingdom. The final few chapters of the book of Kings chronicle Judah as a single kingdom, following the exile of Israel. The reader might think that, having seen the northern tribes taken out of the Promised Land, Judah would repent from their sins and turn to the Lord. Efforts were made to reform Judah. Judah’s two best kings – Hezekiah and Josiah – ruled during the era of the single kingdom, instituting widespread religious reform, tearing down idols, and calling the people back to God. But their efforts had little lasting effect. Judah was taken into Babylonian captivity. Kings ends halfway through the Jewish exile in Babylon.

The patterns are slightly different for each kingdom, and not all elements are present for every king, but the most important element is consistently present – the theological verdict, which addresses whether the king was good or evil in the sight of the Lord. Prior to Kings, the Old Testament history books focus on what the people did. Kings focuses on what the kings did. Generally speaking, the people followed their kings.

Though Kings focuses on the reigns of the kings, several prophets are mentioned, most notably Elijah and Elisha. The prophets consistently brought “the word of the Lord” (a keynote in Kings) to the Israelites. They informed the people of their sins and warned them of impending doom if they did not repent. The prophets were largely ignored by God’s people, but God consistently provided information and opportunity for repentance. Kings provides a framework for many of the books of the prophets, which state explicitly during which reign they were written.

Though Kings is largely a dark book, recounting a downward spiral of idolatry and immorality (much like Judges), it should be seen in the greater context of the Old Testament, which anticipates, and then details, a return from exile. Though God punished his people for their covenant failure by allowing them to be exiled, he demonstrated compassion and faithfulness to his people by preserving a remnant who would return to the Promised Land.

Conscientious readers of Kings will recognize a vital theological message – leaders of God’s people may be politically savvy and might even be good in the sight of God, but no human leader will ever fully meet the needs of his people. The words of Gideon, the judge, are applicable. After his victory over the Midianites, the men of Israel wanted Gideon and his son to rule over them as a king. Gideon responded, “I will not rule over you, and my son will not rule over you; the Lord will rule over you” (Judges 8:23). Gideon emphasized to the Israelites that their ultimate ruler is God. The Old Testament concept of God as king serves as the backdrop for the New Testament concept of the “kingdom of God.” God’s kingdom is his rule and reign over people. In the monarchical period of Israel, God allowed human kings to rule over his people in order to demonstrate to them that the success or failure of a kingdom depends largely on the character of the king. What would it be like to live under a king who is perfectly just, perfectly benevolent, and perfectly loving? Such is the nature of God’s kingship and kingdom expressed through his Messiah.

The book of Kings can be a difficult read – the names of the kings run together and the chronology is hard to follow – but, in addition to providing a context for the present to its first readers, Kings provides a universal context, a living message, for understanding how God relates to his people in terms of covenant, kingship, worship, and more.

PODCAST SUMMARY: Route 66: A Journey Through The Bible – Kings

FULL AUDIO: Route 66: A Journey Through The Bible – Kings