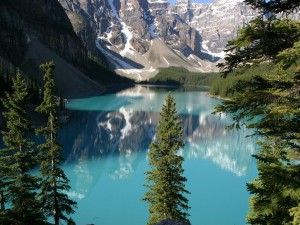 Our first stop on Route 66: A Journey Through The Bible is the book of Genesis.

The English title of the book of Genesis comes from the Greek translation of the Old Testament and means “origin.” The Hebrew title is translated “in the beginning,” using the first phrase of the book. Genesis is a book of beginnings. It speaks of the origin of the world, of humanity, of sin and its catastrophic effects, and of God’s plan to restore blessing to the world through his chosen people.

Traditionally Genesis has been ascribed to Moses. Modern critical scholarship does not hold with tradition, but for our purposes we will assume Genesis was written, at least in large part, by Moses. Mosaic authorship implies a specific cultural context into which Genesis was written. The NLT study Bible elaborates:

“When Genesis was written, the children of Israel had been slaves in Egypt for 400 years…

“While enslaved in Egypt, the Israelites had adopted many pagan ideas and customs from their Egyptian masters (e.g. Exodus 32:1-4). They were influenced by false concepts of God, the world, and human nature (e.g., Exodus 32), and were reduced to being slaves rather than owners and managers of the land. Perhaps they had forgotten the great promises that God had made to Abraham, Isaac, and Jacob, or perhaps they had concluded that the promises would never be fulfilled.

“Before entering the Promised Land, the Israelites needed to understand the nature of God, his world, and their place in it more clearly. They needed to embrace their identity as descendants of Abraham, Isaac, and Jacob.

The message of Genesis is as relevant now as it was when it was written. Genesis orients the reader to the rest of the Old Testament, and thus to the rest of the Bible. It explains in story form the nature and character of God, the place of man in God’s creation, and how God relates to his creation. Genesis provides a context for cosmic themes of creation, light and darkness, good and evil, fullness and emptiness, and knowledge. Genesis introduces readers to a personal, generous, gracious, just, merciful, covenential, providential God, who intimately relates to his creation. Genesis introduces readers to the nature of humanity, the devastating consequences of sin, and the desperation of life without God. Genesis traces the beginning of God’s work to overcome with blessing the curse that came on the world because of sin. Genesis lies at the heart of the Christian worldview and lifeview.

Genesis naturally divides into eleven sections. Each section but the first has the heading, “These are the generations of…” or “This is the account of…” and explains the history of a line of descent, usually focusing on the activities of one or a few individuals in each line. Genesis may be outlined as follows:

Genesis 3:7-6:8 details the downward drift of humanity. Though God deals with Adam and Eve generously, they rebel against God, reject his expectations, and sin against him. Upon succumbing to the craftiness of the serpent, Adam and Eve’s eyes are opened to the knowledge of good and evil (3:7). Their initial reaction is shame and they begin to create barriers to intimacy by retreating behind fig leaves (3:7). These barriers extend to their relationship with God; they hide from him (3:8), deliberately separating themselves from him. When questioned about their behavior, Adam blames Eve for his sin, demonstrating the instantaneous decay of human intimacy (3:12). As a result of their sin, God casts Adam and Eve out of their home (3:24), curses the earth (3:17), and subjects Adam and Eve and, by extension, all humankind to hardship and death (3:16-19). God created a perfect world, characterized by light, life, and order. But the devastating effects of sin replaced light with darkness, life with death, and peace and order with confusion and pain.

As humanity drifts downward, the reader witnesses increasingly troubling moral behavior on the part of individuals. The reader meets Cain, whose jealousy and anger (4:5) leads him to murder his brother, Abel (4:8). Lamech is acknowledged by the author for corrupting the design of marriage (4:19; cf. 2:24) and displaying a disturbing arrogance and pursuit of power and vengeance (4:23-24). The devastating effects of evil are seen in the sharp decrease in the lifespan of people during the generations of Adam (5:1-6:8). The most dramatic decline is seen between Methuselah and Lamech – a 20 percent decrease. Soon after, God designates a lifespan limitation (6:3). The decline of humanity culminates in God’s seeing that “the wickedness of man was great in the earth, and that every intention of the thoughts of his heart was only evil continually. And the Lord was sorry that he had made man on the earth, and it grieved him to his heart” (6:5-6)

There are glimmers of hope for humanity scattered throughout the detail of its initial decline. God anticipates the defeat of the serpent, which tempted Eve (3:15). God extends his grace by clothing Adam and Eve after their sin (3:21). God encourages Cain to overcome temptation (4:7) and, even after Cain kills Abel, God protects Cain from danger (4:15). In the days of Enosh, people begin to call on the name of the Lord (4:26). Enoch walks with God (5:24).

Though God is gracious as humanity declines, he is also just. In response to the wickedness of humanity, God determines to destroy the inhabitants of the earth (6:7) and sends a flood. Even in justice, however, God shows grace to Noah, who finds favor in the eyes of the Lord (6:8). Through Noah, God saves a remnant of humanity, as well as the other inhabitants of the earth, from the destructive force of the flood, and promises to Noah that he will never again curse the ground because of humanity or strike down every living creature as he had done (8:20-9:17).

God’s grace to Noah introduces the concept of covenant, which is central to the message of the Old Testament. From Genesis onward, the covenant becomes the most persistent metaphor for God’s relationship with his people. A covenant is a relationship that gives promises and imposes obligations. The term covenant describes the relationships God established with humanity and all creation through Noah (8:20-9:17), with Abraham and his descendants (12:1-9; 15:1-21;17:1-14; 26:1-5; 28:1-22), and later with Israel in the days of Moses (Exodus 19:3-42:11), with David and his offspring (2 Samuel 7:8-16). God’s relationship with Adam also has the character of a covenant, complete with commands, promises, and warnings. Through his covenants, God establishes special relationships with people. All of God’s covenants are gracious. He invites his human partners into a special relationship and calls on them to respond with faithfulness to him. The prophet Jeremiah anticipates a new covenant of heart and mind which God would one day establish with his people (Jeremiah 31:31-34). Christians believe this covenant was established through Jesus Christ.

Following the flood, humanity multiplies, and returns to deliberate rebellion against God. Having made his covenant with Noah not to destroy his creation as he had previously, God instead initiates a plan of redemption and blessing for all humanity through the line of Terah. God develops a covenant with Abram (who is later renamed Abraham) to bring blessing to all. The rest of the book (11:27-50:26) tells of God blessing Abram and his descendants and providentially preserving the line of blessing (cf. 50:15-21). The stories of the patriarchs – Abraham, Isaac, Jacob, and Joseph – explain in story form the nature and character of God, the place of man in God’s creation, and how God relates to his creation.

Genesis demonstrates God’s faithfulness to his covenant of blessing, though individuals are inconsistent, at best, and, at worst, unfaithful to him. This dynamic is seen throughout the Bible.

Let us identify with Genesis and allow it to instruct, encourage, and admonish us as we begin this journey down Route 66.

PODCAST SUMMARY: Route 66: A Journey Through The Bible – Genesis

FULL AUDIO: Route 66: A Journey Through The Bible – Genesis