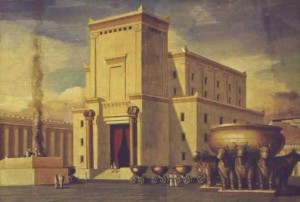 The place Chronicles occupies in Scripture may impact the way we read the book. Chronicles is in a different position in the Hebrew Bible in comparison to our English Bible. In the Hebrew Bible, books are placed in three divisions – Law, Prophets, and Writings, as reflected in Luke 24:44, where Jesus explained that “all things which are written about Me in the Law of Moses and the Prophets and the Psalms must be fulfilled.” Chronicles is located in the Psalms or more commonly called the Writings and as the last book in this division. In the English Bible, Old Testament books are placed in four divisions – law, history, poetry, and prophets. In this case, Chronicles is placed in the history division, immediately following Kings and before Ezra-Nehemiah.

So, reading Chronicles in our English Bible often means reading right out of Kings and into Chronicles and reading Chronicles the same way we just read Kings. This can result in our missing the point of Chronicles entirely. Chronicles reads like Kings in places, even quotes from Kings, but its message is distinct. We must think and work to allow Chronicles to express its own themes and message. By the way, like Samuel and Kings before it, Chronicles was originally one book that was divided into two at some point, presumably to help readers manage its l

Now let’s turn our attention to the book itself, and particularly to its scope and contents. Divided by topics, Chronicles comprises:

We’ll begin our consideration of the book with a brief glance at the genealogies. Chronicles is one of two books in the Bible to cover all human history from creation to the writer’s day; and interestingly the writers of both books employ genealogies to do this. Both the writer of Chronicles in the Old Testament and Luke in the New Testament trace their respective genealogy back to Adam. In Chronicles, this shows that Israel had connection and continuity with the past. For us, the genealogy chapters are uninteresting and appear to be unnecessary, what one writer called “spiritual Sominex.” But they had great importance to readers after the exile and especially to those who had returned to their homeland. By means of the genealogies, the writer documents an identity that reaches back across the tragedy of captivity and demonstrates continuity with ancient Israel when times were better and relationship with God was clearer. The returning exiles could believe the promises God made with their ancestors and have hope that a descendant of David would still occupy his throne.

When we turn our attention to the main body of Chronicles, we soon become aware of what the chronicler includes and omits. He uses Samuel and Kings as sources and even quotes from these books at times. We are able to observe by comparing Samuel and Kings with Chronicles what the writer of Chronicles omitted and what he included. For example, he inserts Saul’s genealogy in 1 Chronicles 9:35-44, but omits all information about Saul found in 1 Samuel 9-30. In fact, the Chronicler records nothing about Saul’s kingship, except that the Lord put Saul to death (1 Chronicles 10:13-14). Following this, the writer focuses attention on David. For all practical purposes, the writer portrays kingship in Israel as beginning with David, and David is presented in an almost entirely positive light. The writer of Chronicles omits several episodes of David’s life that we are familiar with from the book of Samuel. These include:

Also, the writer of Chronicles includes several episodes about David, many of which are not found in any other Old Testament books. These include:

Let’s consider for a moment what the writer of Chronicles does with other kings. He records nothing about northern kings, and he selectively presents accounts of southern kings. He picks out eight kings and concentrates on five of them, ignoring twelve southern kings completely. He deliberately plays up the kings he mentions. If he can say anything good, he says it. If he can’t something good, he hardly says anything. In addition to his emphasis on David and Solomon, the writer of Chronicles focuses especially on Jehoshaphat, Hezekiah, and Josiah – kings who were involved in spiritual reforms and promoting the temple.

So, what do we have going here? Is the writer of Chronicles a bad historian? Did he gloss over or distort history? No, but he does tell history in his own way and for his distinctive purposes. This is why we must allow both Kings and Chronicles to speak their respective messages. All history has an angle; the historian selects people and events through which he tells the story. The writer’s themes shape which events he records and how he presents them. The needs of his readers and the author’s purpose control his selection and presentation of the events.

Chronicles was written after the exile when the readers had experienced the destruction of Jerusalem and the end of the Davidic succession of kings. But then the exile ended for some and these must have had high hopes for Zerrubabel, a descendant of David who led the first returnees back to Jerusalem. People were not asking about exile: “How could this have happened to us?” or “Why did it happen?” Kings had answered these questions. The more relevant questions for people after exile were, “Are we still the people of God?” Did the exile end God’s covenant with His people?” “What do God’s promises to Israel, Jerusalem, and David, made before exile, have to do with us who live after it?”

The Chronicler prepared another history of Israel that addressed a different set of questions than those that influenced Kings. For several years after exile, Israel’s existence depended on the whims of Persian monarchs. The nation was in danger of lapsing into a state of despair and lethargy and forgetting their divinely appointed role as a light to the nations of the world. They did not need to be reminded of the internal strife and sin that rocked the nation 600 years before. They needed to be reminded of the glorious destiny God had promised to them. They needed to see history in a way that would assure and inspire them, that would turn their eyes and hearts away from their miserable present condition toward the future … and more specifically to the promised Messiah – the ultimate fulfillment of God’s covenant with David.

The writer did not idolize certain kings of Israel, but he did idealize them. He wrote an idealized history of the past to provide a picture of the future. He portrayed David of the past in a wonderful way for the purpose of building hope for the “David” of the future.

God does not forget His promises or His people. He will bring glory even out of despair. He was still with His people and he would continue to be with them, but they must also be with Him. They must trust and hope in Him, and out of trust and hope they must obey God and be faithful to Him. And for us who live after the Messiah came and accomplished all God planned, we must operate on the same basis – out of trust and hope we must obey God and be faithful to Him. In this way, this neglected book of our Old Testaments is an important stop on Route 66, our journey through the Bible.

PODCAST SUMMARY: Route 66: A Journey Through The Bible – Chronicles

FULL AUDIO: Route 66: A Journey Through The Bible – Chronicles