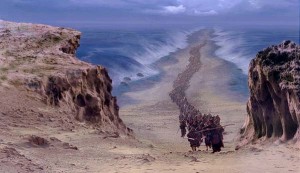 Exodus is the second book in the Old Testament. “Exodus” means “the way out” or “a going out.” The main event of the book of Exodus is the Israelites’ departure from Egypt.

Exodus, with Genesis, Leviticus, Numbers, and Deuteronomy, traditionally has been ascribed to Moses.

Exodus is theological history. It is a fusion of narrative and law, in which the focus is always on God and his relationship with his people.

The biblical story that begins in Genesis continues in Exodus. The opening chapters of Genesis depict a serious problem: God made the world and human beings for blessing (Genesis 1:27-28), but the world fell under a curse due to human sin. Humanity became deeply corrupted (6:5), alienated from their Creator (3:23-24) and from one another (4:14). Death, violence, and confusion were rampant (4:8, 23-24; 11:9). According to Genesis 12 God initiated a plan to restore the world through Abraham. God chose Abraham and his descendants to be in a special covenant relationship with him, promising to make them into a great nation through which the entire world would be blessed (vs.1-3). A short time later God began to fulfill his promises (21:1-7). The rest of the book of Genesis traces God’s activities to preserve his chosen people. The book of Genesis ends with Abraham’s descendants settled safely in Egypt, greatly blessed, but far from the good land God promised Abraham his descendants would receive. Four hundred years pass between the events of Genesis and Exodus. Exodus opens by informing the reader that the generation of Joseph died “but the people of Israel increased greatly; they multiplied and grew exceedingly strong, so that the land was filled with them” (Exodus 1:7). The reader is also informed that, though the Israelites had increased in number, they had not increased in fortune.

Darkness and gloom hang over the Israelites in the initial chapters of Exodus. The deeds of Joseph, who saved Egypt from a devastating famine (Genesis 37-50), had largely been forgotten (Exodus 1:8), and the Egyptians had turned against the Israelites. Fearing the Israelites had become too large and mighty and that they might join with Egypt’s enemies to fight against Egypt, the Egyptians began to deal harshly with the Israelites, forcing them to build store cities for the Egyptian Pharaoh (1:11), make bricks, and work in the fields. The Egyptians ruthlessly enslaved the Israelites and made their lives bitter (1:14). The Pharaoh even attempted to control the Israelite population by having the midwives to the Israelite women kill all male newborns by throwing them into the Nile river (1:15-16, 22). The midwives feared God, however, and did not kill the children, and God caused the Israelites to multiply and grow very strong (1:17-22).

Into this context, the main human character of the book of Exodus is born. Genesis has many human protagonists; Exodus essentially has one. The reader is introduced to him in chapter 2. A Hebrew mother refuses to kill her newborn boy as the Pharaoh had commanded and hides him three months (2:2). When she could hide him no longer, she places him in a basket of bulrushes among the reeds by the river (2:3). The sister of the infant boy watches at a distance as the daughter of the Pharaoh comes to the river to bathe, discovers the child, adopts him, and names him Moses, which means “drawn out” (2:4-2:10). Moses grows up in the Pharaoh’s house, though he seems to be aware of his origin. Moses is disturbed by the injustices committed by the Egyptians against the Israelites and one day, seeing an Egyptian beating a Hebrew, rises up against the Egyptian, kills him, and hides his body (2:11-12). Fearing retribution, Moses flees from Egypt and becomes “a sojourner in a foreign land” (2:22) for many years.

The final three verses of chapter 2 interrupt our introduction to Moses. These verses tie together Genesis and Exodus and set the stage for the rest of the book. “During those many days the king of Egypt died, and the people of Israel groaned because of their slavery and cried out for help. Their cry for rescue from slavery came up to God. And God heard their groaning, and God remembered his covenant with Abraham, with Isaac, and with Jacob. God saw the people of Israel—and God knew” (Exodus 2:23–25, ESV). Though this passage says God “remembered” his covenant, it does not mean he had forgotten it. Rather, God had been making good on his promises to Abraham all along, even during those four hundred years of slavery. According to Genesis 15 God made clear to Abraham that the promises made to him and his descendants would not be fulfilled immediately. In fact, God predicts four hundred years of slavery for Abraham’s descendants before they would take possession of the Promised Land (cf. Genesis 15:13–14). God’s promises were being fulfilled each year the children of Israel were in slavery in Egypt. God’s providence was active in the interim between Genesis and Exodus. We can’t be sure to what extent the Israelites were aware that the four hundred years of slavery were part of God’s plan, but God clearly had not forgotten his plan. When the four hundred years of slavery were fulfilled, the time came for deliverance. The Israelites’ cries for salvation and redemption went up to God. The rest of the book of Exodus demonstrates God’s faithfulness to his covenant promises.

According to Exodus 3 Moses is commissioned to be God’s human partner in executing his plan of redemption. Though Moses is reluctant, and at first makes excuses not to do what God commanded, he eventually obeys and returns to Egypt to be God’s agent of deliverance for the children of Israel. Upon his return to Egypt, Moses rendezvous with his brother, Aaron, and confronts Pharaoh with words from the Lord: “Let my people go…” (5:1).

Pharaoh initially refuses and orders that the Israelites be given more work. This discourages the people and discourages Moses, who becomes somewhat agitated with God (cf. 5:22-23). But God remains steadfast and true to his promises and delivers the descendants of Abraham from slavery in Egypt. He sends plagues to harden the heart of Pharaoh, who finally lets the people go. God also parts the Red Sea so the children of Israel can walk out of Egypt on dry ground.

God’s purposes in delivering the people are many. Prior to the plagues, God explains what he will do for the Israelites and why. “Say therefore to the people of Israel, ‘I am the LORD, and I will bring you out from under the burdens of the Egyptians, and I will deliver you from slavery to them, and I will redeem you with an outstretched arm and with great acts of judgment. I will take you to be my people, and I will be your God, and you shall know that I am the LORD your God, who has brought you out from under the burdens of the Egyptians. I will bring you into the land that I swore to give to Abraham, to Isaac, and to Jacob. I will give it to you for a possession. I am the LORD’ ”” (Exodus 6:6–8, ESV). God’s purposes include deliverance, redemption, judgment against the Egyptians, proof of his power as God, and the initiation of intimate relationship with the Israelites. He promises to take the children of Israel as his people, to be their God, and to take them to the Promised Land. The Israelites’ entrance into the Promised Land would come with time, but God first establishes, seals, and confirms covenant relationship with his people.

The two major themes of Exodus are deliverance and covenant, or redemption and relationship. Some form of the word “deliver” is used 9 times. Exodus describes the need for deliverance, the might of the Deliverer, the character of deliverance, the duty of the delivered, and the provision for the failure of the delivered. God’s purposes went beyond deliverance to include covenant. The theme of covenant is introduced in Genesis and developed in Exodus. What began in Genesis as a covenant with one man, Abraham, is in Exodus confirmed to an entire nation.

Chapter 32 details a great failure on the part God’s covenant people – the worship of another god. God is furious with the betrayal, and the people are punished, yet God is gracious and faithful and, according to chapter 34, renews his covenant with the Israelites, even after their disloyalty.

The instructions concerning, and the preparation of, the tabernacle occupy about one-third of the book of Exodus (chs.25-31, 35-39). The tabernacle is designed to be the representation of God’s presence with his covenant people. Exodus focuses on the presence of God. God reveals himself – his nature, his character, his power – throughout the book, blessing his people with his presence. His continual presence is at first represented by pillars of cloud and fire but, in the end, his presence comes to rest on the tabernacle, indicating God’s presence was to be a permanent fixture in the Israelites’ camp. The book of Exodus ends with the glory of the Lord filling the tabernacle.

Exodus takes the reader from the groaning of the Israelites in the first chapters, to the glory of God in the final chapter. In between, God, the main character of the book, is portrayed as active, powerful, providential, faithful, and covenantial. He is presented as a God of redemption and relationship.

PODCAST SUMMARY: Route 66: A Journey Through The Bible – Exodus

FULL AUDIO: Route 66: A Journey Through The Bible – Exodus