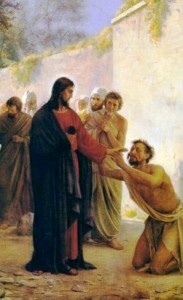 Mark gets his Gospel off to a running start with the simple and direct words, “The beginning of the gospel of Jesus Christ, the Son of God” (1:1) and keeps his narrative moving at a rapid pace. Mark is known for his concise and vivid style. He compactly records the facts of Jesus’ life and work and allows them to speak for themselves. Mark’s recurring use of the word “immediately” or “straightway” lends motion and excitement to his writing. Mark used the word “immediately” forty times in his work.

Mark may have been the first written Gospel, which was later used as a source document by both Matthew and Luke in writing their Gospels. If Mark was first, he most likely broke new ground by offering an account of Jesus’ life and work when nothing quite like it had ever been written. His work is not a biography in the strictest sense of the term, but, as he designates it, “a gospel” (Mark 1:1) – the good news about Jesus, in which about a third is devoted to Jesus’ death.

Let’s think first about Mark, the disciple and writer. Mark does not attach his name to his work, but his name was associated with this Gospel from early years, and his authorship of the work is widely accepted. He is “John, also called Mark” mentioned in Acts 12:12, 25. His two names reflect a bilingual background — “John” being his Jewish and “Mark” his Latin name. The New Testament portrait of Mark is fascinating. Mark’s family was likely prominent, at least well-to-do. The early Jerusalem church gathered in the house of Mark­’s mo­ther, Mary (Acts 12:12), which may indicate something of the house’s size. Also, Mark’s family was wealthy enough to afford at least one servant-girl, Rhoda (12:13).

It is reasonable to conclude that Mark could have been an eyewitness of Jesus’ life, death, and resurrection. Tradition has long maintained that the “certain young man” with Jesus at the time of His arrest was Mark. The scene is the Garden of Gethsemane. Soldiers have come to arrest Jesus, and His disciples all fled. The account then reads: “And a certain young man was following Him, wearing nothing but a linen sheet over his naked body; and they seized him. But he left the linen sheet behind, and escaped naked” (Mark 14:51-52). Was Mark roused from sleep and dressed quickly to run out and see what was happening? In the confusion of the event, he was momentarily seiz­ed by the soldiers, but was able to escape, thou­gh he left behind his only clothing, a linen wrap of some kind. It is an intriguing scene.

We know Mark best through his association with the apostle Paul. Mark was a cousin to Barnabas (Colossians 4:10), and when Barnabas and Paul left Jerusalem for Antioch they took Mark with them (Acts 12:25) as their helper (13:5). The men preached through the island of Cyprus, but when Barnabas and Paul left the island for Pamphyli­a, Mark returned to Jerusalem (13:13). Mark’s leaving the group later served as a point of contention between Paul and Barnabas, resulting in their parting company (15:36-41).

In light of Mark’s apprehension in working with Paul and Barnabas, there is an interesting emphasis in his Gospel. Mark focuses attention on Jesus’ disciples as well as Jesus Himself, and notes that the disciples were terrified (4:41), amazed, and afraid (10:32). Both Matthew and Luke tone down or omit Mark’s vivid language at these points. If 16:8 was the original ending of Mark’s work, it is intriguing that he ended on a note of astonishment and fear. It is notable that Mark also documents statements about the disciples’ hard hearts (6:52, 8:17, 16:14­). Did Mark have special interest in the difficulties and struggles of following Jesus as the result of his own experience? But failure is not the end of Mark’s story. When Paul wrote his prison letters, Mark was with him and Paul called him “my fellow worker” (Colossians 4:10, Philemon 24). In his second letter to Timothy Paul wrote affectionately of Mark: “Pick up Mark and bring him with you, for he is useful to me for service” (2 Timothy 4:11).

In addition, ­second century AD tradition associates Mark with Peter. Papias and Irenaeus, two second centurry church leaders, make this association is their writings. Also, comparing Peter’s preaching recorded in Acts 10:36-41 with the general outline of Mark’s Gospel shows a remarkable correspondence. Perhaps Mark’s Gospel was partly derived from reminisces of Peter’s preaching. In 1 Peter 5:13, Peter speaks warmly of Mark as “my son.” Peter is the most prominent disciple among the twelve in Mark’s Gospel – mentioned twenty-three times.

Now let’s consider the characteristics and contents of Mark’s Gospel. He may have written especially for Roman readers Mark’s association with both Paul and Peter in Rome provide occasions for an interest in writing for western minds. Traditionally, Mark’s Gospel has been understood as having a special appeal to this audience. His concise and rapid style would have been appealing to the Roman mind. Mark used some Latin technical terms, showing his knowledge of Latin: legion (5:39), executioner (6:27), praetorium (15:16), and centurion (15:39). In two instances he explained Greek expressions by Latin ones: “two copper coins [lepta, a Palestinian coin] which amount to a cent [quadran­s, a Roman coin circulated on in the western half of the Empire] (12:42) and “the palace, that is the praetorium” (15:16). Mark took the time to explain Palestinian customs and practices (7:3, 14:12, 15:42) and to translate Aramaic words and phras­es (3:17; 5:41; 7:11, 34; 14:36; 15:2­2, 34), which would have been helpful to a Gentile audience. Mark likely wrote for Romans and possibly for Roman Christians who were suffering at the hands of Nero between AD 60 and 70. William Lane mentions that “it is noteworthy that the Gospel of Mark reaches its climax in the confession of Jesus’ deity by a Roman centurion (15:39­). Roman Christianity found in [Mark’s] Gospel an account peculiarly appropriate to its life and problems” (p. 25).

Another notable characteristic of Mark’s Gospel is observed by Stephen Motyer: “Mark’s is the Gospel for disciples. … Jesus is the principal character in Mark’s drama, but the disciples come a close second. Throughout the story, Mark is concerned with discipleship — its privileges, hindrances, dangers, challenges, and perplexities. This is the distinctive emphasis of Mark’s Gospel. In a very human and encouraging way he reveals how difficult it was for Jesus’ first followers to take their initial steps in discipleship, and how patiently Jesus persevered with them even though their understanding was so limited and their obedience so fragile”(Men With a Message, John Stott, revised by Stephen Motyer, p. 12).

In a fast-paced, action-packed account, Mark presents Jesus to be followed decisively and whole-heartedly. Mark may have struggled with this early in his life of faith, but in time he got it and wants his readers, including you and me, to get it as well.

PODCAST SUMMARY: Route 66: A Journey Through The Bible – Mark

FULL AUDIO: Route 66: A Journey Through The Bible – Mark