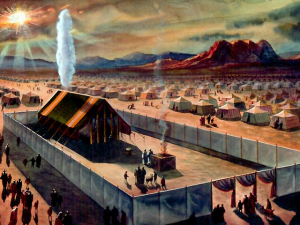 Leviticus is a difficult and demanding book for modern readers. The reading is tedious, the details are many, and the instructions appear strange and cumbersome. But if the book is difficult and demanding, it is also impressive and valuable for those who take the time to learn its contents and grasp its meaning.

Leviticus opens with the nation of Israel at Mount Sinai and the Lord speaking to Moses at the tent of meeting. God had given detailed instructions about the tabernacle, and skilled workmen followed them carefully to construct it. Once the tabernacle was built, a cloud covered the tent and God’s glory filled it. The book of Exodus ended here. Now, what were the people to do with this glory-filled place? The book of Leviticus answers this question. If the last half of Exodus regulates a place for people to worship, Leviticus presents at length the way to worship. To put this another way, Exodus emphasizes where to worship God, while Leviticus deals with how to worship Him (Arnold and Beyer, Encountering the Old Testament, p. 119).

A cursory glance at Leviticus might yield the conclusion that the book is all laws and regulations. But a closer look reveals that short narrative sections are included – especially in chapters 8-10 and again in 24:10-23, reminding us that the book is not merely law; it is law in real life.

Leviticus presents three areas of life in which people who are both human and sinful can be holy … three areas designed to help people be holy as God is holy.

First are sacrifices (Leviticus 1-7). Several types of sacrifices are described in great detail. In fact, the focus is on description and not on purpose or significance. The meaning of the sacrifices appears to be assumed for the most part, while the emphasis is on the proper procedures. Sacrifices helped people because they were the divinely sanctioned way for restoring covenant relationship with God. In short, Israelites could seek God’s forgiveness by offering a substitute to take the penalty of their sin (Longman & Beyer, p. 77).

The second part of Leviticus in which God was helping people be His people relates to priests (Leviticus 8-10). Priests spent much of their time in close proximity to God and thus were to be holy. Priests’ work was to help people with sacrifices and also to teach people the way of holiness: “to make a distinction between the holy and the profane, and between the unclean and clean, and so as to teach the sons of Israel all the statutes which the Lord has spoken to them through Moses” (10:10).

The third part of Leviticus in which God was helping people be His people pertains to purity (Leviticus 11-27). Since God was present with His people, the purity of the camp must be maintained. This brought holiness into everyday life. God’s people were to be “clean” regarding food, childbirth, skin diseases and mildew, and discharges, to name a few of the areas addressed. The laws and rituals guided Israel and the priests in keeping the camp pure. People must respect the distinction between the holy and profane and between clean and unclean in all walks of life

Now let’s pause in our Route 66 journey to see where we’ve been and where we are. We saw in Genesis that God created everything and chose to have people of His own. He chose Abraham as the man through whom this would happen, but His promise to Abraham was a promise to the entire world (Genesis 12:1-3). God chose a people, formed them into a nation, delivered them from slavery, and set them on their way to a land which He promised them. He explained that they would be His people and He would be their God. This meant they would be a holy nation, because God is holy (Exodus 19:6). He would live among them (Exodus 29:45-46). He came in glory to be with them and stay with them (Exodus 40:34-37). But this relationship had implications and demands. How can human, sinful people be God’s people? The answer is twofold – by means of sacrifices and law.

With sacrifices and related rituals, God provided the means for sin, unholiness, and uncleanness to be addressed and the ramifications to be covered and reversed. By means of law God explained how people could live in the world and still be properly related to Him. The stipulations of the law preserved and protected people to live within a covenant relationship with God and to enjoy its blessings and benefits. The law explains who God is and what He is like, and calls people to bring all corners of their lives to conform to Him. Thus by law people were not called to earn a standing with God, but were guided to match their lives to God – thus the motto of Leviticus: “Be holy, for I the Lord your God am holy” (Leviticus 19:2).

PODCAST SUMMARY: Route 66: A Journey Through The Bible – Leviticus

FULL AUDIO: Route 66: A Journey Through The Bible – Leviticus