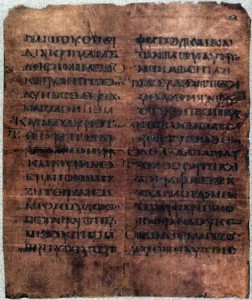 Each Gospel – Matthew, Mark, Luke, and John – has distinctive features that result from the author’s purpose and writing style. Matthew is the most Jewish of the four Gospels. Matthew sets Jesus’ story clearly against an Old Testament background from the outset when he begins with a genealogy and presents Jesus as “the son of David, the son of Abraham” (1:1). Matthew regularly shows Jesus as fulfilling Old Testament prophets. Jesus Himself was aware that the Scriptures of the prophets must be fulfilled (5:17; 26:54, 56), and Matthew demonstrates He did this. Matthew’s Jewish flavor makes his work especially appropriate to begin our New Testament. This Gospel is a perfect bridge between the Old and the New, between God’s great promises and their remarkable fulfillment. Let’s see what Matthew has to say …

Some details of Matthew’s structure remain ambiguous for us, but several features are clear. He includes five blocks of Jesus’ teaching material, more than any other Gospel writer, and each ends with the same words: “When Jesus had finished …” (7:28, 11:1, 13:53, 19:1, 26:1), though the precise starting point of each block of teaching is not in every case easy to determine. Interspersed between the blocks of teaching are Jesus’ actions and people’s reactions.

Matthew regularly provides geographical information around which the story progresses, and, if he used Mark as a source, he likely “borrowed” the geographical matrix from him. Roughly speaking, Jesus …

A synthesis of structural indicators yields the following plan (modified from France, pp. 63-65).

Matthew’s portrait of Jesus has some prominent features, such as his presentation of Jesus “fulfilling” Scripture. Matthew includes this feature at least twelve times in his Gospel, as a table included in the blog indicates.:

With this emphasis, Matthew presents Jesus as the Coming One, the culmination of what God purposed and promised. Jews in particular needed to understand that Jesus was not a revolutionary or rebel; He was the fulfillment of God’s purpose and plan.

He is Christ or Messiah – the One through whom God would fulfill His purpose of salvation for His people, as promised in the Old Testament. For most Jews, the Messiah was a coming king in the line of David, whom God would send to restore His people. Many Jews would interpret this as restoring Israel to national independence and their rightful pre-eminence as the people of God. Jesus was cautious about using the term “Messiah,” because of wrong ideas many people had (see 16:16, 20, 21-23; 26:63-64). Matthew regularly describe Jesus as Messiah (1:1, 16, 17, 18; 11:2; 16:20) as such would save His people from their sins (1:21) by His death (26:28).

Matthew shows Jesus is the Son of Man – the term Jesus frequently used to described Himself. When the title “Christ” was offered to Him, He substituted the “Son of Man” (26:64). This Hebrew and Aramaic phrase means simply a human being. Jesus Himself may have coined the title based on Daniel’s vision of “one like the son of man” (Dan. 7:13). Jesus used the phrase in particular in predicting His own rejection, suffering, and death (20:18-19, 28).

Matthew presents Jesus as King – a king was anticipated by the Jews, but the nature of His reign and His kingdom was seriously misunderstood. Popular expectation was for a military leader who would deal with the Romans. The royal entrance into Jerusalem (21:1-11) displayed Jesus as He really was: the son of David, the King of Peace. He would not reign with violence (26:51-52) but by the obedience of His disciples (28:18-20).

• Matthew shows Jesus as king in several ways. He had royal lineage (1:1, 6). Magi from the east searched for the “King of the Jews” (2:6). Before the High Priest, Jesus claimed to be the Christ (Messiah, the Anointed One) (26:63-64); before Pilate, He claimed to be the King of the Jews (27:11). The soldiers mocked Jesus as “King of the Jews” (27:29) and above His head on the cross the placard read, “This is Jesus the King of the Jews” (27:37). Most people did not discern the nature of Jesus’ kingship, but Matthew leaves us in no doubt that He was in fact God’s Anointed King.
• In addition, kingdom occupies a prominent place in Matthew. The word “kingdom” occurs over eighty times in the Gospel. The kingdom was near (4:17, 16:28), present (12:28), and future (26:29). Jesus inaugurated the kingdom, initiating the rule of God in the world once and for all. Jews who longed for the Messiah must understand that He has come and what kind of Messiah He is. All people must grasp the significance of Jesus the King.

It is notable that Matthew begins His Gospel with Isaiah’s words to the effect that Jesus is “God with us” (1:23) and closes the Gospel with an assurance from the Son Himself that “I am with you always, even to the end of the age” (28:19-20).

We don’t know much about Matthew, but we know how he came to be Jesus’ disciple. In Capernaum, Jesus passed by a tax-collector’s booth in which sat Matthew Levi. Jesus said to him, “Follow Me!” and Matthew did! Tax collectors were an unpopular group – despised and even hated by common people, and condemned by the Pharisees, scribes, and Jewish rabbis. Most Jews grouped them with sinners — “sinners and tax-gatherers.” Jesus did not consider tax-collectors to be out of reach. Levi Matthew was sitting at the tax-collector’s booth, and Jesus called him. Jesus has room in the kingdom for disreputable people like Matthew, and, I might add, like you and me. Don’t forget that Christianity is not a religion for the respectable. It is for the disreputable — for sinners. Matthew responded wholeheartedly to Jesus’ call. Luke tells us that Matthew left everything behind (Lk. 5:28), and this was not an easy decision. Once he left, he likely left tax-collecting behind forever.

Matthew’s message is about a ruling King different from all others. He does not sit on a throne in regal splendor, but hangs on a cross in shame. He rules with compassion, humility, and selflessness. This message drew Matthew from greed and selfishness to a life of serving the King. This same King calls us from ourselves and from the world to come follow Him.

PODCAST SUMMARY: Route 66: A Journey Through The Bible – Matthew

FULL AUDIO: Route 66: A Journey Through The Bible – Matthew